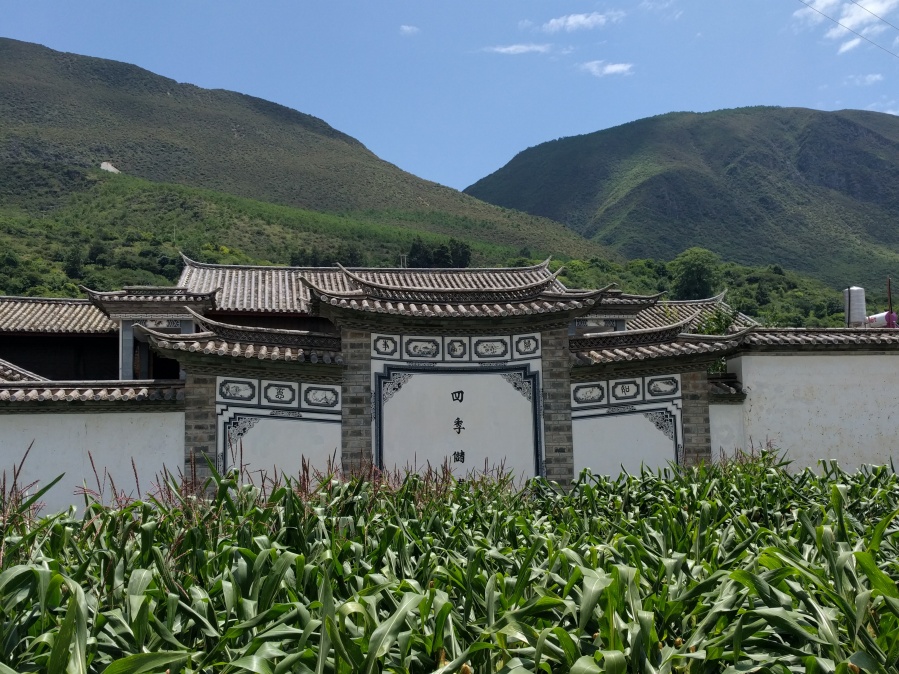 After completing a summer consulting engagement in Shanghai, I decided to explore a bit of China.  The obviously popular destination is Beijing, featuring The Great Wall; luckily, I had paid homage to this immensely inconceivable structure as well as other remarkable sights a few years ago thus was considering alternate destinations.  China is a humongous, vast country with an extraordinary amount of nature, culture and cuisine to absorb; it was a bit of a challenge determining where to head with limited time, so I asked the locals.  They certainly had intel on must see places.

The friendly travel poll resulted in a near tie between Sichuan Province, home of Panda bears, spicy cuisine and the famed Hot Pot dish; and Yunnan Province, featuring….errr….well, its claim to fame wasn’t crystal clear to me, I simply knew that the plurality polled highly recommended the trip.  It was a toss up – you can venture a guess where I landed. 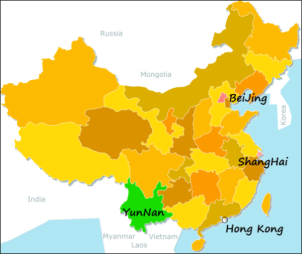 The Yunnan Province, located in Southwest China, borders Myanmar, Laos and Vietnam to the South.  Nearly 50% of China’s ethnic minorities hail from here, and the Old Southern Silk Road can be traced to the Western part of this region.

The easiest portion of what would be an unforgettable adventure, was traveling from Shanghai to Kunming, the main city within Yunnan, by the famed bullet trains.  These locomotives are impressive!  Prompt timetables, clean surroundings and super high speeds – circa 200 mph.  It’s by far the best way to travel within China.

I must say, with triple emphasis, that China is the safest country I’ve stepped foot in – hands down!  As a solo female traveler, I was astonished, amazed and impressed to never once experience a sense of threat, danger or apprehension, regardless of the hour, location or lack of language skills.  Unbelievable! 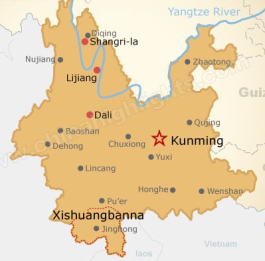 My plan was to travel west from Kunming to Dali and subsequently head north to Lijiang, with stops in small, quaint towns.  This stretch is known for ancient, well preserved towns, distinct architecture and gorgeous views along the Old Southern Silk Road

Upon arriving in Kunming, I was immediately thrown into episode #1 of the week.  What seemed to be a simple task of meeting my travel agent to settle accounts, turned into a two hour saga.  Saga, mainly because of a blocked ATM card (in spite of a travel notice).  Oh joy.  By 10 pm, I had finally unblocked my card after three withdrawal attempts and 30 minutes of customer service transfers, not to mention the slight embarrassment and frustration.  Clearly, the US customer service employees were oblivious to my sense of urgency and exhaustion on the other side of globe.  Sigh.

Alas, all was okay…for the time being.

The next morning, I had a 7:20 am bus departure, heading west to the ancient town of Dali.  It had not fully dawned on me that outside of “Tier 1” cities, namely Shanghai, Beijing, Guangzhou & Shenzhen, the amount of spoken English reduces significantly.  My travel agent had instructed me to find the right bus by “asking” people at the station.  Little did I know there was absolutely no written nor spoken English.  Translation:  point to the destination on my ticket with an expression of helplessness.  Bus station below…Good luck with that.

Equipped with sixty words of Mandarin that seeped into my brain over a few months, I wasn’t exactly proficient in producing comprehensible phrases, forget about using the correct tones (there are four tones in Mandarin…ie, the same word could have four meanings based on tone used).  At best, I was skilled in ordering a bottle of cold water (Yī píng bīng shuǐ), wine, tea, certain foods and I knew numbers into the 100s.  Therefore, as most foreigners do, I relied heavily on showing the Chinese translation, which was provided in advance by my travel agent or by Google translate in a pinch…both heaven sent!  (Ex:  Dali train station=> 大理火车站).  There are several pitfalls to this method, yet it’s better than the alternative.

Having successfully hailed a cab to the bus station, and boarded the right bus, thanks to a few kind souls and lots of pointing, I was on my way.  It occurred to me during the ride that the days ahead would likely be a test of mettle.

From Dali, it was a short bus ride (plus more pointing) to my first destination:  Xizhou, a tiny, ancient town of the Bai ethnic minority.  Pleasant and quaint with cobble stone streets, horse carriages and a variety of street vendors, Xizhou sits on the Erhai lake, affording delightful mountainous views and a haven in the boonies. 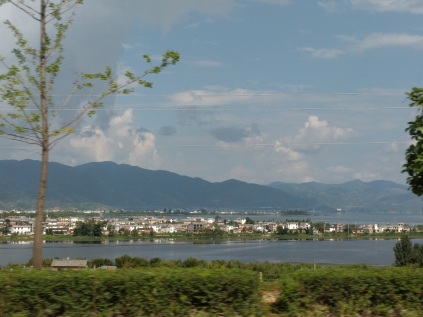 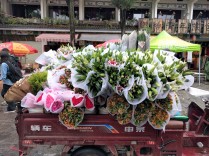 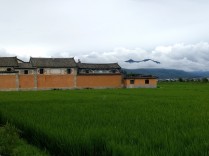 Mountains among the clouds

The buildings reflect Bai architectural style, with exteriors artfully decorated in hexagonal honeycomb patterns, predominantly by white, black, and dark blue glazed tiles.  Many of the homes around town are considered some of the most well-preserved and have remained largely unchanged since being built during the Qing Dynasty (1644-1912). 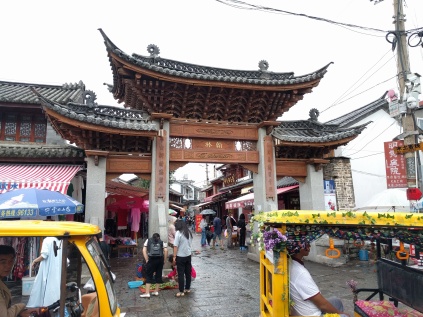 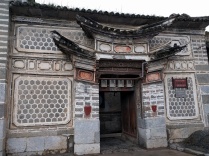 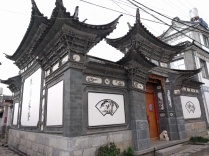 As I strolled around town and absorbed the scenery, I came upon a gaggle of animated school kids.  Enchanted by their cute faces, I furtively clicked a handful of pictures.  A few seconds later, the camp counselor approached me inquiring whether I spoke English or Chinese.  To their delight, they wanted to ‘interview’ me in English.  To my delight, I didn’t get scolded for sneaky picture taking.  After a simple Q&A, we all huddled for a group picture with customary peace signs. 🙂  This brief encounter with spirited youth made my day!  Not to mention, it was the first semblance of conversation in 24 hours.

After a night in Xizhou, the next stop was to an even tinier town called Shanxi.  I was feeling relatively confident in my ability to move around, bargain and generally exist with scant Mandarin.  Suffice to say, ignorance is bliss.

To reach Shanxi, my task was to board a bus destined for Jianchuan=>  剑川.  The art of matching this character sequence to those displayed on bus placards seemed pretty doable.  I mused:  look for the sequence of “a house plus five vertical lines”.  No sweat.

After thirty minutes of searching for a matching placard at the unmarked road side ‘bus stop’, slight anxiety set in;  thus I began to stop random passersby, a policeman, a lady awaiting a package, basically anyone who might assist.  The good news is that I was in the right place, based on all the gestures.  The not so good news, two and a half hours later, I was still perched under the same shady tree, alongside the two lane, main thoroughfare, awaiting said bus.  Repeatedly, I’d attempt to hail a bus, some stopped, some didn’t; when they did stop, I’d shove my phone screen as close as possible to ‘co-pilot’ to share my desired destination, 剑川, in hopes of the thumbs up signal.

What should I do?  Do I continue to wait?  Will the bus pass by eventually?  How many times have I missed the right placard?  If I don’t find the bus, where should I go?  Who can help me?  I have no idea what people are saying to me.  Aaaaargh. 😦

Breathe.   Back to the tree shaded perch I went.  It’s not the end of the world and I’m in no danger – meager attempts at self comfort.

In the meantime, a local who had been sitting nearby offered me a taxi ride to Shanxi – he was likely snickering at the sole foreigner and her unsuccessful attempts at hailing a bus…for hours.  By any standards, the fare for a 3 hour taxi ride was cheap, however, my Spidey senses said méiyǒu (no).  He even told me (via a translation app) that the bus I needed wouldn’t pass by after 3pm.  How convenient, it was just after 3pm…likely story buddy.  I wasn’t born yesterday.

After regrouping with my party of three (me, myself and I), I decided to give it another go, one more attempt at hailing the right bus.  Fingers crossed.

And….denied.  In disbelief, I stood on the curb, completely disheartened. 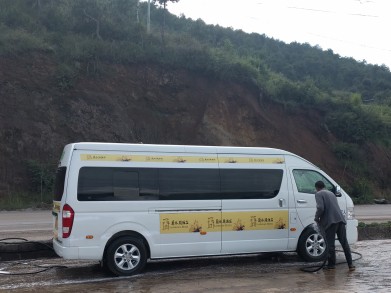 A few seconds later, an angelic white van inched along in traffic.  In a state of incredulity, I was zoned out when suddenly, a twenty something Chinese gal calls out from the van, in my mother tongue, “Are you going to Shanxi?”  Huh?  What?  Shocked, I may have affirmed with a nod, yet before I could respond, traffic sped up and the van advanced.  Still standing motionless, I watched a potential ride slip away.  Good fortune prevailed and the van pulled over, the young girl beckoning me to hurry up.  I took off, dragging my roller bag over bumpy sidewalks.

With personal safety a priority, while standing on the sidewalk, I questioned who? what? when? where?, all in thirty seconds;  meanwhile, the driver had stowed my bag, waiting for me to take a seat.  The young girl reassured me of safety and that the four twenty year-old passengers were headed to Shanxi for the bi-annual Fire Festival.

Do I get in the van or wait it out?  Recall my earlier comment re China being the safest country.

With soaring adrenaline levels, I climbed in the van, curious how in the world they guessed my destination.  Turns out the driver had an inkling, thus pulled over.  An angel sent to rescue me.  After settling in, I peered out the window, finally exhaling.  What followed was a tidal wave of emotion and tears.  Tears of being rescued, of communication struggles, of feeling helpless, of finding my way solo, of gratitude and mostly, of the inherent goodness of humanity.  WOW.

And so I arrived safely that evening to the wonderful village of Shanxi – just in time for the Fire Festival, which celebrates harvesting of crops. 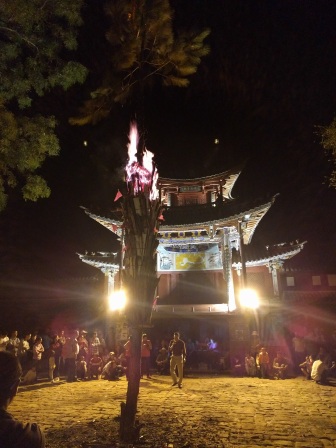 Fire festival in the main square 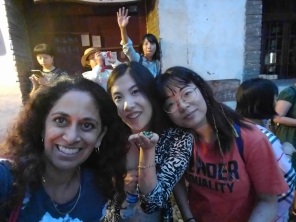 Two college students who befriended me 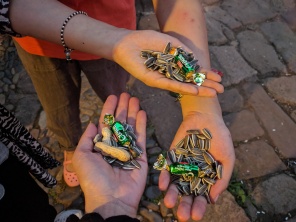 The charming village is truly magical and beautifully preserved. 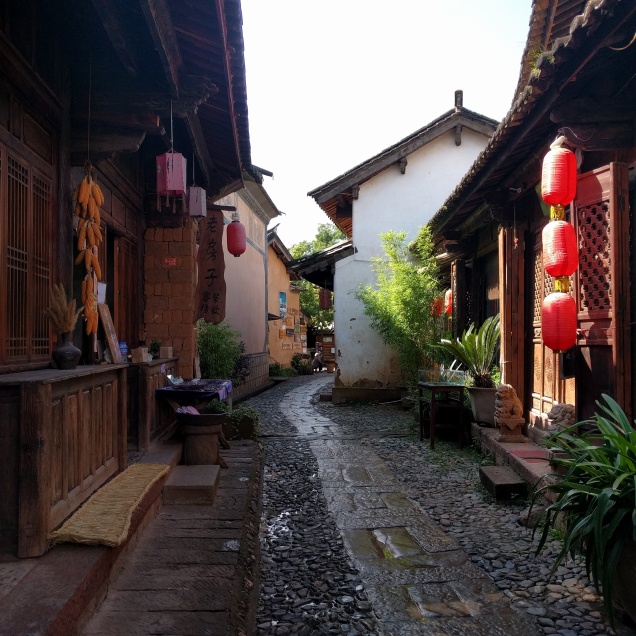 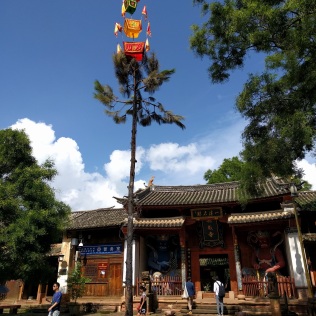 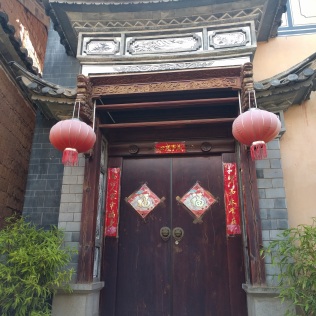 I loved observing the locals (below).  Wifey is definitely not buying Hubby’s story!  The lady selling homemade caramels was so adorable, she fixed her hair before I was allowed to take this picture. 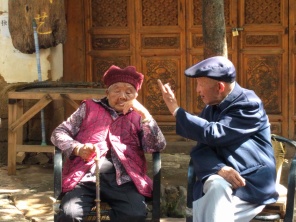 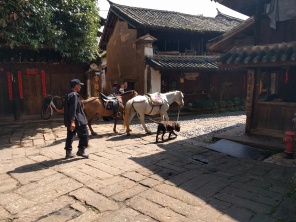 A man and his animals 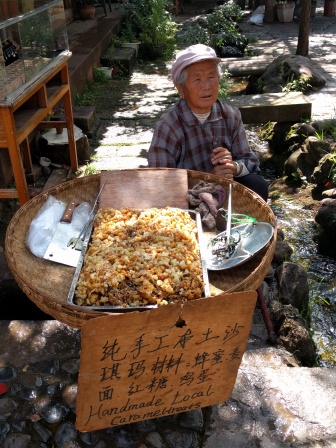 Biking through small villages, capturing the inherent simplicity and splendid beauty of daily life. What a peaceful, unfettered life they must lead. 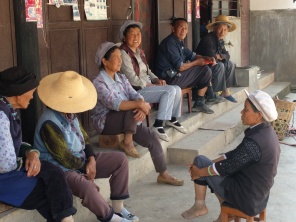 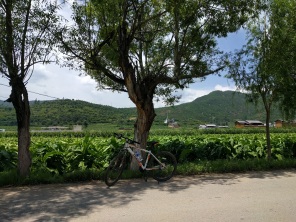 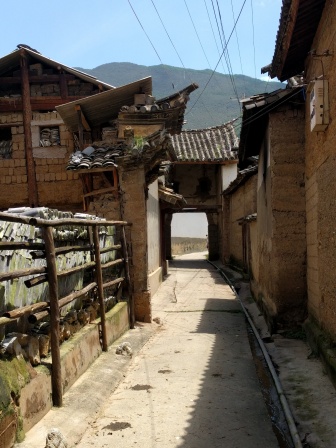 Village next to Shanxi

Stalking these ladies on my bike, I was curious where they were headed.  LOL! 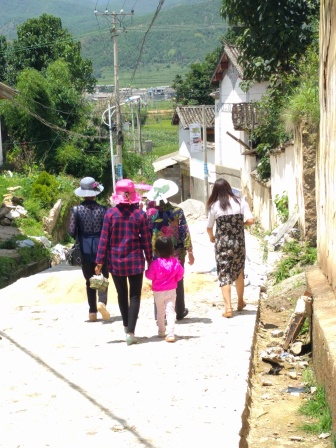 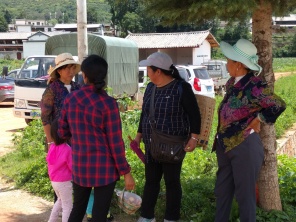 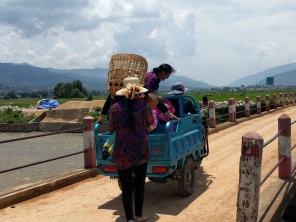 The remainder of my time in Yunnan bestowed similar daily challenges; yet in each moment of despair, another angel appeared to guide me.  In every sense, the struggles incurred were well worth the unforgettable trip; they have not only endowed me with tales that I will share for a very long time, but also reinforced that humanity is inherently good.  I was genuinely overwhelmed and touched by so many random acts of kindness by the Chinese.  I wondered if I or my people back home would be as kind, altruistic, compassionate and giving to complete strangers or foreigners.  I hope the answer is always yes.

There was no way to adequately thank these angelic souls, at most I could profusely say xièxiè (thank you).  After much reflection, my only plausible explanation for such goodness is that the universe, karma, God – however one categorizes the abstract world – is balanced and circular.  We reap what we sow….keep spreading positive energy & light.