The word saudade in Portuguese signifies a feeling of longing or nostalgia.  As temperatures dip and winter is in full swing, it’s easy to daydream about warm, sunny days.  Lately, I catch my mind drifting off to radiant summer afternoons spent in the Iberian Peninsula.  Ahhh, what I’d give to be back in Portugal absorbing rich history, culture and cuisine.

Several years ago I stepped foot in this beautiful country during a short business trip.  Oddly enough, I experienced an immediate sensation of a déjà vu while in Lisbon.  That mystery still remains unsolved, nevertheless, last summer I had the gift of time to explore the jewels of Lisbon and beyond. 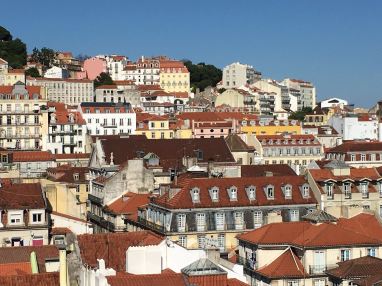 I would consider Portugal to be somewhat of a hidden gem.  I use the word somewhat as it may have already lost that hidden gem status given the recent publicity by travel gurus, boasting it as a top this or top that place to visit.  The contrast in quantity of tourists observed during my first visit to my second, a span of six years, was stark.  Lisbon was literally bursting at the seams with mostly French and British travelers.  Perhaps it didn’t help that I was visiting in June; yet, the growth was obvious based on the fleet of tuk tuks and other efficient vehicles used to transport travelers around the winding, steep alleys and roads.

There is no question that seeing Lisbon on foot is the equivalent of an interval workout on the stair master.  The city is constructed on a hill, thus there is only one way up…pick your poison, the inclined streets or the endless flights of stairs.  It’s a dream for the fit bit fan…and for the fanny!  LOL.

The Old World city of Lisbon is truly enchanting with its architecture, narrow and winding streets, elaborately painted building tiles, called azulejos, and friendly locals.  I was particularly fascinated by the variety of azulejos that adorn facades around town.  These building tiles arrived in Portugal during the 15th Century, under Moorish rule. The word azulejos is not a derivation of azul (Portuguese for “blue”), but instead a word of Arabic origin and comes from az-zulayj, meaning “polished stone”.  These colorful tiles add an aesthetically pleasing dimension to the surroundings.

One of my favorite parts of Lisbon was visiting the prominent São Jorge Castle.  It sits high upon the hill and has spectacular view of the city and of the grand Tagus river.  The fortress dates back to 2nd century BC and has passed through the hands of many tribes and conquerors.  It’s no joke to climb all the way to the top, but there is plenty of cold beer to consume as you pat yourself on the back for burning those calories.  🙂

Quenching our thirst! Bea, myself & Robert

Views from the top

Two really cool iconic structures of Lisbon that conjure up images of other foreign lands include:  25 of April Bridge and Christ the King.  The 25 of April bridge is often times mistakenly considered a replica of the Golden Gate Bridge in San Francisco.  It is similar in appearance, yet was built by the American Bridge Company which constructed the San Francisco–Oakland Bay Bridge, not the Golden Gate.  Christ the King is a Catholic monument and shrine dedicated to the Sacred Heart of Jesus Christ overlooking the city of Lisbon.  It was inspired by the Christ the Redeemer statue of Rio de Janeiro after the Cardinal Patriarch of Lisbon visited that monument.  Kind of neat to find similarities in places which are thousands of miles apart.

Belém is a popular destination within Lisbon as it’s home to the famous Tower of Belém and the stunning Jerónimos Monastery. 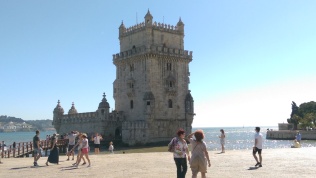 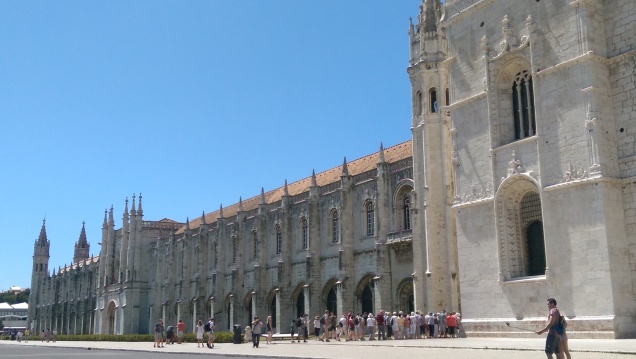 But even more renowned than these impressive structures is the delectable pastry called pastel de nata. One cannot leave Portugal without stopping at the famed bakery, Pastéis de Belém, where there is always a crowd eager to sample the delicacy.  The ancient recipe of this treat comes from the neighboring Jerónimos Monastery.

Festa junina, friends and fun:  As luck would have it, the summer trend of finding friends traveling through Europe didn’t fail me in Portugal.  Forty eight hours with a few of my closest friends from Miami was heaven sent and unbelievably, perfectly timed.  I don’t think we could have planned it had we tried!  Needless to say, it was one laugh after the other with this crew, not to mention the Olympic sport of wine drinking – thankfully wine in Portugal is affordable. Saúde! 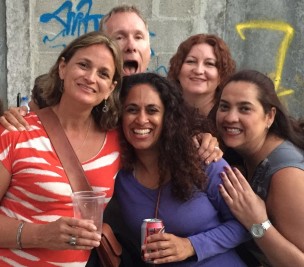 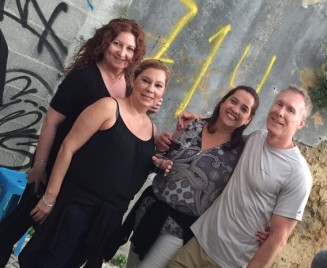 Together we experienced Festa Junina, an annual outdoor festival celebrating the nativity of St. John the Baptist, which occurs in mid June.  Luckily, our forty-eight hour overlap occurred exactly during the street parties, thus we had the privilege of joining in with the locals.  Revelers take to the street in parade formations and fill the sidewalks with food stalls; street musicians abound, and there is an overall buzz in the air.  The video below captures a group of locals, on their way to join a larger parade.

In addition to seeing friends from home, I also managed to reconnect with two former colleagues from Lisbon.  They graciously treated me to a delicious meal, a taste of wine from the Douro valley, and lots of laughs reminiscing of the good ole days. 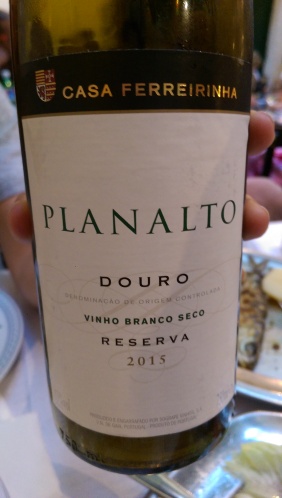 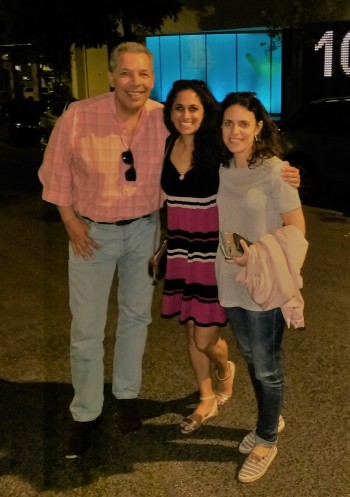 Being a huge fan of seafood, I was in heaven with the selection of fresh “fruits of the sea.”  The summer is known as the onset of feasting on large grilled sardines.  Yum!  I don’t think I’ve ever tasted this caliber of sardine – a must try!  Other notable savory dishes include bacalhau (dried & salted cod) pastries and grilled octopus.  Don’t be afraid of the octopus, it’s so tender and out of this world.  Even if seafood is not your favorite, there are plenty of delicious treats for everyone.

After ascending and descending the hills of Lisbon, I headed to Porto in the Northern part of the country.  This city is famous for its exportation of port wine.  Porto is a wonderfully, quaint city that sits on the Duoro River, a perfect getaway to explore the city and beyond.

The rest of the trip was spent meandering south, along the peninsula, stopping at idyllic beach towns, in search of nothing in particular.  Being used to bath water-like temperatures of the Atlantic Ocean in Florida, I suppose I was expecting to find much of the same along the coast of Portugal.  The water was freezing!!!  Most unexpected for me were the spectacular cliffs and rugged rock that populate the coastline, coupled with deep blue oceanic hues and seemingly untouched beaches.  It was exhilarating to soak up such natural beauty with little to no disturbance from fellow mankind, as if I had a slice of my very own beach. 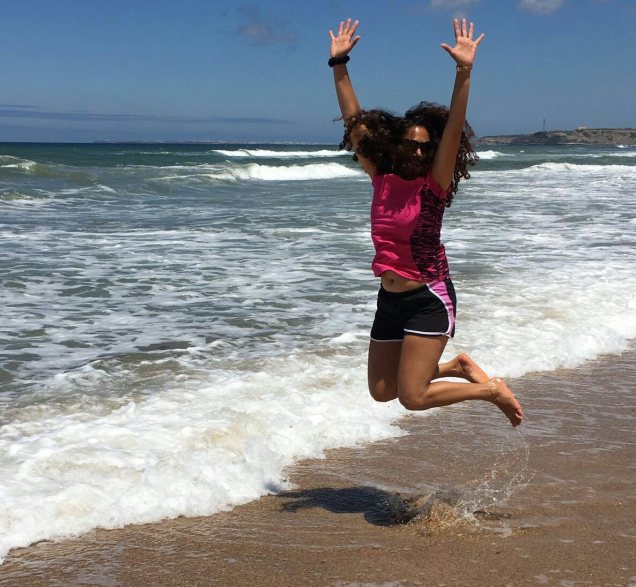 Heading back to Lisbon, the last stop was in Sintra, a picturesque town that is set amidst the pine covered hills of the Serra de Sintra. The nobility and elite of Portugal were once enticed to live in this town and therefore constructed exquisite palaces, extravagant residences and decorative gardens.  Given there are way too many palaces to see, I chose to visit the colorful Pena National Palace.  I really thought I was in the middle of a fairy tale, walking through the well manicured, verdant gardens and arriving at this gigantic structure, adorned in vibrant colors and shapes.  It’s difficult to do any photographic justice to this amazing structure from the ground – simply too impressive and grand!

While Sintra draws the crowds, Cascais is an adjacent small coastal, fishing village type town, featuring the natural formation called Boca do Inferno (Hell’s mouth).  The Boca do Inferno is an interesting cliff formation – due to ceaseless pounding of the Atlantic Ocean on the cliffs, a small cave was chiseled out, which subsequently collapsed forming a small bay and natural arch.  You can feel the vitality of the ocean, it’s astounding! 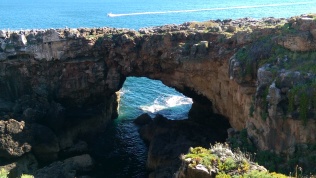 Ocean side of Boca do Inferno

My visit to Portugal was on the eve of a much anticipated UEFA European Championship 2016 (soccer tournament).  I vividly recollect internationally celebrated Portuguese player, Cristiano Ronaldo, proclaiming on TV that he is the absolute best futebol player in the world.  Such boasting seemed a bit premature, but alas, he brought home the championship title with the Portuguese national team, a first ever tourney win.  Parabéns Portugal!

And on a side note, I miraculously experienced zero travel mishaps while in Portugal.  Yes!

Sonia’s trivia:  True or False – Over half of the world’s cork is produced in Portugal.