I hadn’t spent much time considering a trip into the jungle prior to flying to Ecuador.  In fact, I was so focused on visiting the Galapagos that everything else seemed like icing on the cake.  With time on my hands and a bit of last minute planning, I was lucky enough to venture into the Amazon, also known in Ecuador as el Oriente.

Most often, Brazil is the obvious destination when considering an Amazonian adventure.  A quick geography lesson illustrates that the entire Amazon basin, in fact, bleeds across various countries including: 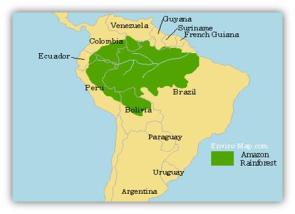 Venezuela, Peru, Colombia, Ecuador and Bolivia, with Brazil being home to the largest portion of the region.

So off I went, post Galapagos, terribly excited about exploring a unique and remote place where cars and pavement are absent, and there are very few people aside from the natives.  What a refreshing feeling to be outnumbered by the sights and sounds of God’s creatures which dwell in the rivers, on the trees and everywhere in between.  In all honesty, I was marginally educated on the biodiversity and truly did not know what to expect.  The only things I was certain to experience were heat, amazing wildlife, and a 100% chance of encountering big bugs in close proximity.  Big bugs? Enter mild anxiety.

After several hours of traveling to the north east corner of Ecuador, I finally arrived at the entry point of the Cuyabeno Wildlife Reserve where this mysterious jungle experience was about to begin.  Thankfully, the ‘entrance’ had zero semblance of Disney World as it was quite nondescript in appearance.  I boarded a small skiff at the edge of the river along with nine strangers, heading to the Eco Lodge and embarking on my first scenic tour of the jungle.  Much like an African safari, the inhabitants are active and visible during the morning and evenings…who can blame them for avoiding the mid afternoon heat!  Binoculars are essential for anyone wishing to capture the creatures in action; also be sure to take a high magnification camera lens for best results. 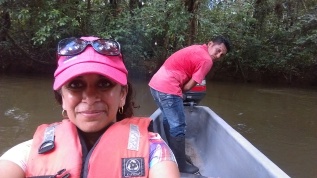 The next several days comprised of early morning and evening excursions on the skiff to spot the marvels of nature.  We spent hours weaving through the rivers, hoping for a glimpse of birds, sloths, monkeys, and many more…attempting to observe their colored elegance, lazy existence and playful behavior.  There is never a guarantee with Mother Nature, thus I feel terribly fortunate to have observed six species of monkeys; a multitude of gorgeous birds including Herons, Macaws, Cormorants, King Fishers, Toucans; an Anaconda (yikes!), Sloths and other creatures.

The Toucans and Macaws were stunning as expected, varying in color and brilliance.  One of my favorite sightings was the regal Capped Heron.  This bird, which is supposedly a rare sighting, carries an elegance and royalty, matched by its stately appearance…what a treat!

Before arriving to the jungle, I was so excited to see the Amazon river dolphins – they are pink!  Who doesn’t love cute dolphins and which girl doesn’t love pink?  Imagine the combination.  They were proving difficult to spot; alas, on the final evening, there it was…a mauve colored mammal with a long thin snout…they really do exist!  Already exhilarated by the jungle experience, I was ecstatic and considered this moment as the cherry on top.

During the evenings, there was an opportunity to swim in the vast lake and relax in the midst of the stunning sunsets.  There are indeed piranhas in the lake, apparently, they do not prefer humans. LOL!  Imagine an evening with no sound nor light pollution, only the twinkling stars above and the harmony of nature and its creatures.  Heavenly!

In addition to the daily excursions, there were also a few night walking excursions.  The mild bug anxiety that I had managed to suppress was about to morph into monster sized anxiety at the thought of strolling through the jungle in the pitch dark night.  Remember, this habitat is home to anacondas, bullet ants, pumas, tarantulas, frogs, massive roaches, and thousands of other creepy crawlies that make me squeal and shiver without fail.  YUCK.  To boot, the nine boat mates of mine were obsessively into creepy crawlies; in fact a few of them eagerly sought out creatures around the lodge, such as the Three Horned Beetle (without a doubt, the biggest beetle I’ve ever seen in my life), and would bring them to the group for show and tell.  I was definitely on the periphery of this bug madness, I wasn’t having any of it!  Gross, Gross, Gross.  So when it came time for the night excursion, I donned long pants, long sleeves and rain boots, bathed in insect repellent, and was ready to set out with a flashlight in one hand and courage in the other.  There was no time like the present to wrap my mane of hair into a tight bun to prevent flying objects from nesting in the curls. Ew.

From the time I stepped off the skiff, meandered through the forest, and returned to the boat, I’m guessing an hour had passed, yet it felt like an eternity.  Our naturalist was superb in that he got up close and personal with insects, clearly having no fear whatsoever.  He provoked tarantulas and banana spiders to come out from hiding, he handled bullet ants with ease, he sought out snakes, frogs and all sorts of other nocturnal creatures.  The group was highly engaged and then there was me, interested in science, yet trying to endure this walk with out freaking out;  swatting away bugs, perhaps imaginary ones, wondering how long I’d be in this mild discomfort, on the verge of jumping or shrieking.  At one moment, a lady in the group turned to me and said, “you are doing quite well.” She had clearly seen my face during the Three Horned Beetle episode, and it was obvious I wanted nothing to do with creepy crawlies.  Either I have perfected my poker face or it was simply too dark for her to see my expression, little did she know that the monster sized anxiety was whirling in the pit of my stomach like a hurricane.

And then….it happened.  A huge roach landed on my leg.  OMG!  Stomach in mouth.

I looked down and saw a huge brown blob on my right thigh.  All I wanted to do was yelp and scream in disgust, but that would have been utterly ridiculous among these bug enthusiasts.  It took everything I had to flick that thing off my pant leg and retain composure.  Exhale, everything was okay….until it happened again two minutes later. ICK.

Much to my chagrin, I was faced with more roach encounters, even one next to my pillow on the last night in the eco-lodge.  Must have been my perfume, eau de OFF, attracting these critters.  By this point, I was a pro at the thumb-to-middle finger roach flick.  Thus, with great ease (and disgust), I flicked that thing off the bed, waited to hear the small thump, had a mini celebration and managed to go to sleep.  The mosquito nets on the bed were of great comfort to me, less so due to the scarcity of mosquitoes, more so to prevent flying bats and other nocturnal creatures, who freely entered and exited the open cabin as they desired, from landing on me.   Whew, somehow I made a pact with the universe to coexist with creepy crawlies, as long as they stay on their side of the room.  Talk about taking a giant step out of my comfort zone.

The moral of the story – don’t let the bugs deter your Amazon adventure!!  Get out there and explore the incredible wild life, unmatched beauty,  breath taking sunsets and magnificent nature.

Anaconda in a tree 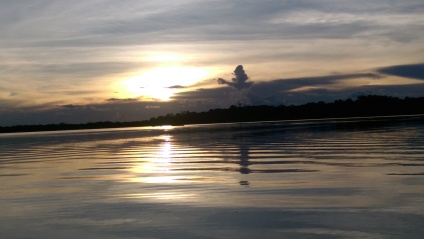 Sonia’s Trivia:  The Amazon River was discovered from an expedition that departed from Ecuador.  True or False?